In 2017, with the LANGE 1 MOON PHASE, A. Lange & Söhne took a new approach to depicting the moon phases by combining the eponymous astronomical display with a day/night indicator. To mark the occasion of the 25th anniversary of the LANGE 1, it is now being presented in an exclusive 25-watch limited edition in white gold with blued steel hands.

The moon stands out especially in the dark. By day, the sun usually outshines it, but even then, it accompanies us. The LANGE 1 MOON PHASE makes that visible. During the daytime, the moon is depicted against a bright blue starless sky; at night, it contrasts against the dark blue heavens with 383 sparkling stars. Thus, the moon always shows itself against a realistic background that doubles as a day/night indicator. This makes it easier to set the time because it assures that the date switches at midnight and not, inadvertently, at 12 noon. 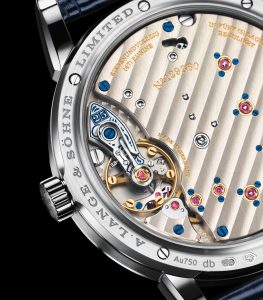 The combination of the moon-phase display with a day/night indicator has two layers. It consists of a solid-gold celestial disc with blue gradation. The disc completes one full revolution about its own axis every 24 hours, mapping the rhythm of day and night. Against this background, the white-gold moon performs its synodic orbit in 29 days, 12 hours, 44 minutes, and 3 seconds with such precision that it takes 122.6 years before a correction by one day is needed.

An exciting interplay of silvery and blue hues unfolds on the asymmetrical, argenté-coloured dial. The thermally blued steel hands and the colour-matched inscriptions harmonise with the gradated blue tones of the celestial disc. The watch features a blue alligator leather strap with a solid white-gold prong buckle. 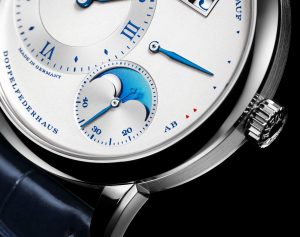 Like all other models of the “25th Anniversary” collection, the LANGE 1 MOON PHASE is endowed with a special movement detail: The anniversary number 25 is integrated in the manually engraved, blue-filled balance cock. As regards typography and form, it corresponds to the Lange outsize date which is set to 25 in all photos. The same number also refers to the strict limitations of all anniversary models.

Discover the LANGE 1 MOONPHASE „25th Anniversary“ as well as the whole collection of A. Lange & Söhne in the Zurich Boutique

What are you searching for?

In order to optimize our website for you and to be able to continuously improve it, we use cookies. By continuing to use the website, you agree to the use of cookies.OK